You know what I think is a little silly?  Using clecoes to join composite structures.  I mean, sure, they work, but unlike when you are working with sheet metal, at the end of it you have a bunch of useless holes that have to get filled in.  Also, multiple insertions/removals of the cleco tends to open up the hole, reducing the grip of the cleco.  So I started thinking about a better way of doing it, and I think I’ve come up with a workable solution – rare earth magnets.  I’ve used them on radio controlled aircraft in the past, and have always been amazed by their small size and large holding power.  So, I bought some of these 5/16″X3/16″ N42 disc magnets from K&J Magnetics.  On the inside of joggle for the Giles 200 gear leg fairings I put down some electrical tape.  I then placed a disc magnet every 1.5″ along the length of the joggle.

The fairing half is on a magnetic building board that I use for building balsa model airplanes, this was very handy because it kept all the magnets in place while I laid them out.  Tucker and Walnut, faithful four legged shop assistants supervise from below: 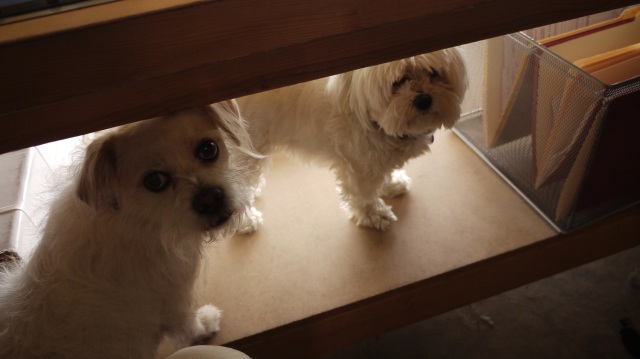 Okay, really, they’re just watching for that cat that walks by the window from time to time.  Anyhow, moving on – I then broke out the hot glue gun, and just surrounded each magnet with a little glue.

All we’re going for here is keeping them from falling off the tape once we slide this thing off the table.  Then, I simply clamped the two halves together at the edges.  After that, I just took one magnet at a time, placed it relatively close to where I thoughts a magnet was.  Once I felt it pull, I just let go, and the magnet snapped into place.

Well that was easy!  The “hole layout” was less time consuming than if I was using drills/clecos, and more tolerant of edge distance.  Once I bond these together and the resin has cured I’ll simply slide the exterior magnets off one by one, and then pull off the piece of electrical tape that the interior magnets are glued to.  Easy!  Obviously, this will only work in non-blind applications, but it sure seems like a nice method to me.  If your alignment is super critical, I would still recommend using a few holes/clecoes just to make indexing them together fool proof.

Published with permission from Better Living Through CNC.

6 World Speed Records to be Broken!

Precision Board HDU – INVENTORY AVAILABLE – Any Sizes – Ready to Ship!  Contact for Pricing